Wow, so how about that Nintendo Direct yesterday? I did NOT expect that wealth of Fire Emblem goodness to be coming our way so soon, especially Echoes in May! Looks like even though the Switch is just around the corner, it doesn’t mean that the 3DS is dead quite yet. But that was yesterday, and you’re all here with me in the future! Today we actually have a decent variety of games to cover in the Download, including the usual Virtual Console releases, sales and new games. So let’s talk Download!

So the first game we’re gonna mention isn’t technically out today, but the retail version does launch tomorrow. This updated classic will have all the grindy goodness that Dragon Quest fans have come to love, along with new dungeons, bosses, items and more. For those looking for a new retail game for your 3DS (and really, who isn’t lately?) you might wanna check out Dragon Quest VIII: Journey of the Cursed King. Speaking of future releases, Poochy and Yoshi’s Woolly World has a demo out now. Though the full game releases February 3rd, I know I’m gonna spend some time with the demo to see if this 3DS port is worth my time. At the very least, I am very tempted by that beyond adorable Poochy amiibo… And lastly, if you are interested in a game that is out right now, you can get your hands on Punch Club for the 3DS! We reviewed the original back on Steam, and it seems well suited to the 3DS system. Help train and motivate your boxer on his quest for glory, along with catchy 90s inspired trappings. 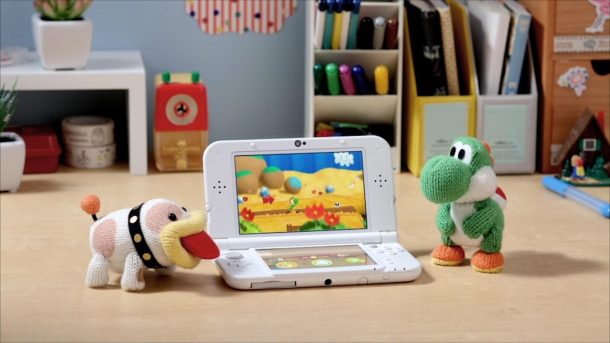 I want that amiibo NOW!!!

As for sales this week, Nintendo still has its January Digital Deals event happening. If you missed our coverage of that, just click here for a refresher.

Last but not least, there are 3 newly released titles that I feel are worth a mention this week. First up is Koi DX for the Wii U. This atmospheric and peaceful puzzle game was released on other consoles previously, but it looks perfectly suited to the Wii U. It’s pretty inexpensive too, so there’s that as well. Next up is Snowball for the Wii U. I am a sucker for retro styled games, and this one looks like the successor to Ice Climbers, except now you play as a seal. Collecting snowballs and finding your baby seals may not excite everyone, but if done right, the simplest premise can make for a compelling game. Lastly, there is a game called Toby: The Secret Mine for the Wii U. Developed by Lukas Navratil, it has a very distinct aesthetic that really appeals to me. It appears to be a exploration / puzzle game, and I am excited to try it out.

So, not a bad week for the Download. Especially after the last couple of slim weeks. Check in with oprainfall next week for more Nintendo goodness as it hits!