INTERVIEW: Talking with Sabotage about Sea of Stars

OPINION: Remakes Are No Substitute

It finally happened. I’ve been ranting and raving about a new character needing to be revealed for a while now, and this week they finally were! Granted, it wasn’t quite the character I was hoping for or expecting, but more on that later. This was a great week of screens, and I’m gonna get to those shortly.

First, just a reminder that this week also marks the premiere of our new feature: Most Wanted Brawler, where our staff contributes characters they want to see playable in the upcoming Smash Bros, no matter how unlikely. Basically, if they are from Nintendo games, they are fair game for a write-up. So, expect some interesting and entertaining ones! Now let’s get Smashing!

As much as I love Mega Man, at first I was underwhelmed by Monday’s pic. I thought it was just more of the same ’till I read Sakurai’s Miiverse post. See that yellow speck on Wily’s Castle? That’s Yellow Devil! Apparently he’ll jump into the foreground to assault our Brawlers, which sounds like a neat trick. I still expect that many other hazards in this level will be revealed. I mean, it’s Dr. Wily. He’s full of crazy tricks and traps!

Tuesday continued Monday’s trend of describing something new about something old. Of course we already knew about the Spirit Tracks stage, but what we didn’t know is that the rear car would change during the course of battle. The fact that the Linebeck Trading Company is involved was just delicious nostalgia. I cannot wait to try this fast paced stage!

Wednesday’s post was a big enough deal that it merits a couple screenshots. This first one isn’t technically the pic of the day, but it speaks volumes. Yes, Rosalina and Luma are now a part of the Smash family. Initially I was concerned she would just be a Peach clone, but from the gameplay video it seems apparent she is anything but. Her play style looks like a very weird mix of Olimar, Ice Climbers and Zelda, which truly intrigues me. Granted, she wasn’t the character reveal I was hoping for (cough*Ridley* cough), but she is a more than welcome addition! Smash needed more ladies, and hopefully Rosalina is worth the wait. Below is the actual screen from Wednesday. 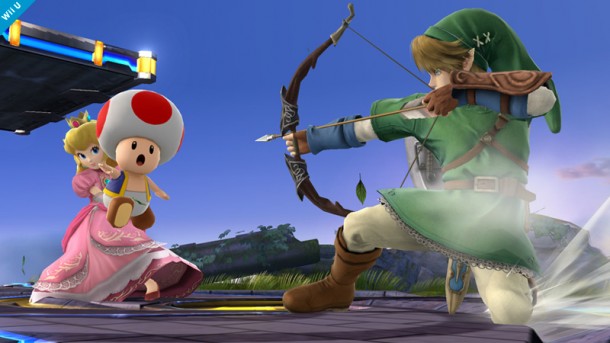 The Miiverse post was pretty derpy, making it seem Peach was holding Toad hostage or something. Moving on.

Thursday was pretty cool. This is why I compared Rosalina to Ice Climbers, since her and Luma can fight separately or together. The adorable little star baby can even Smash remotely! Good stuff, so long as it’s easier to control than Ice Climbers were…

I’m honestly not sure if I get the significance of Friday’s post. Sakurai talks about how tough Lumas are, and yet how easily they can be blown away. There are also apparently an infinite amount of them. Does that mean Rosalina can summon different types of Lumas to fight with her, akin to Olimar? Judging from her gameplay video, that would be my guess. Here’s hoping different colored Lumas also have different strengths and weaknesses…

So that was this week. Below I’ll post the gameplay video of Rosalina’s reveal for your viewing pleasure, assuming you missed it. After that, take a gander at Tyler’ Lubben’s Most Wanted Brawler. It’s our first, and it’s a great one!

TYLER: Since his debut in Super Mario Sunshine, I have been a fan of Bowser Jr. I don’t know if it’s his plucky attitude, his child-like affection for Princess Peach or his ability to make Bowser more than just a one-dimensional “evil guy,” but I think Junior is one of the best new additions to the Mario franchise in years. As such, I’ve wanted to see him in a Smash Bros. game for quite a while. Lacking the brute strength of his father, I see Bowser Jr. playing very differently from the King of Koopas. I imagine him relying much more on tricky tactics to be successful on the battlefield.

As I found his inclusion in Sunshine so memorable, I think Junior’s moveset should reflect his appearance in that game. With that in mind, I see most of his attacks incorporating the paintbrush that he used so liberally to muck up Isle Delfino. Thinking about the slippery properties of the paint in Sunshine, Junior would be able to lay puddles around the battlefield, causing opponents to lose their footing; much like Diddy Kong’s banana peels in Brawl. Not only that, but the paint in Sunshine also had damaging properties, draining Mario’s health if he got too much on him. As such, Junior would also be able to throw globs of paint at his opponents. If it hits, the paint would have a poisonous quality that would leech the target’s health for a few seconds.

While there’s a lot to work with in the Sunshine category, it wouldn’t be all paint-related. In true Koopa fashion, Junior would also be able to use his spiked shell to his advantage. However, rather than the helicopter-like attack that Bower has, Junior would have more of a downward drilling attack to drop on opponents like Kirby’s Rock attack. He could also use the move as a defensive counter-attack on the ground, harming opponents who try to attack him while he’s withdrawn.

For Bowser Jr.’s Final Smash, the paint would be out in full force. After transforming into Shadow Mario, Junior would call down a deluge of paint that would drench the entire arena. Opponents would slip and slide, as well as take poison damage while on the ground, while Junior himself would be immune to the effects for the duration. It might seem unfair to the less mobile characters, but strong jumpers like Yoshi or Kirby would be able to avoid the worst of it by staying airborne.

Maybe you think Smash Bros. already has enough Mario characters in the roster as it is (especially with the Rosalina’s recent reveal), but I think Bowser Jr. would be a welcome addition. He may seem like just a small version of Bowser, but I see no reason to think that he would have to be relegated to the dreaded “clone” status. There’s a lot of potential for him to be a fun and tricky character, and I certainly wouldn’t mind if Sakurai came out tomorrow and said that the Koopa Prince would be stepping into the arena.