PR:Critically Acclaimed The Legend of Zelda: Twilight Princess Arrives on Wii U

Today The Legend of Zelda: Twilight Princess is our for the Nintendo Wii U. We will be reviewing this game so be on the lookout for when that comes out. For now, Nintendo has sent us some more info regarding the game in this Press release:

Critically Acclaimed The Legend of Zelda: Twilight Princess Arrives on Wii U

REDMOND, Wash.–(BUSINESS WIRE)– The best-reviewed game in The Legend of Zelda series from the past 10 years is making a spectacular comeback. The Legend of Zelda: Twilight Princess HD launches for Nintendo’s Wii U home console today, complete with enhanced visuals, new challenges and a Wolf Link amiibo figure that is included with the physical version of the game. 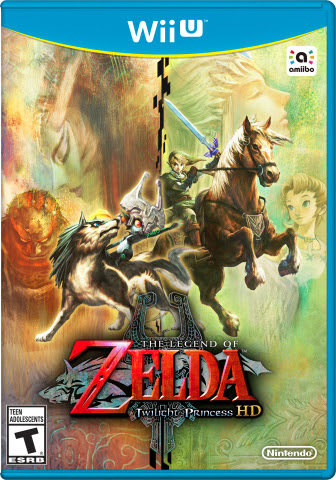 The Legend of Zelda: Twilight Princess HD launches for Nintendo’s Wii U home console today, complete with enhanced visuals, new challenges and a Wolf Link amiibo figure that is included with the physical version of the game. (Photo: Business Wire)

“Fans of the original game will want to check out this version and see a familiar story enhanced in beautiful HD with new game features” said Scott Moffitt, Nintendo of America’s Executive Vice President of Sales & Marketing. “Yet people who never played the game are also in for a special treat, as they get to explore a true masterpiece in the series for the first time.”

Fans of the game, which was originally made for both the Wii and Nintendo GameCube systems, will remember how they took on the role of heroic Link, who fought to restore light to a world that was shrouded in darkness. Link joins forces with the impish Midna as he fights his way through dungeons, solves puzzles and goes on a legendary adventure. One of the most distinctive features of the game is Link’s ability to transform into a wolf. As Wolf Link, he can access places he normally can’t. Plus he can use his senses for tracking.

Aside from the enhanced visuals, some new elements in the HD version of the game include improved controls as well as Hero Mode, a tougher challenge in which Link takes double damage.

Some of the data stored on the Wolf Link amiibo figure can also be used with The Legend of Zelda game for Wii U, which launches in 2016. More details about this functionality will be revealed in the future.

Other The Legend of Zelda amiibo in the Super Smash Bros. series of figures give players additional features: the Princess Zelda or Sheik amiibo figures replenish hearts on the go; the Link or Toon Link figures replenish arrows; and the Ganondorf figure doubles the amount of damage Link takes. When used in Hero Mode, the Ganondorf figure quadruples the amount of damage.

Anyone who wants to learn some behind-the-scenes information about the making of the game can check out a series of videos on Nintendo’s social media sites and at http://zelda.com/twilight-princess-hd/media/.

Remember that Wii U features parental controls that let adults manage the content their children can access. For more information about this and other features, visit http://www.nintendo.com/wiiu.