FEF will make it safely… tomorrow.

This week has been a firestorm for news about Fire Emblem Fates as Nintendo readies for the North American and European launch tomorrow. We recently found out about the full English voice cast and were treated to a cinematic video that showed off more of the story and characters. Nintendo has now dropped a press release that outlines all facets of the new Fire Emblem game. These include differentiating the 3 different versions of the game, explaining new and old gameplay mechanics to utilize on the battlefield, how amiibo support will work in game, and a ton of information about the story and personalities that exist in the Fates world.

All the information is available in the press release below:

Choose Your Fate in Fire Emblem Fates for Nintendo 3DS

REDMOND, Wash.–(BUSINESS WIRE)– For the first time in the beloved Fire Emblem series, you can play through different adventures with unique storylines and characters in the Fire Emblem Fates games for the Nintendo 3DS family of systems. The first two versions, Fire Emblem Fates: Birthright and Fire Emblem Fates: Conquest, launch on Feb. 19. You are faced with a major choice: Do you choose to team up with the birth family you barely know and battle the family that raised you in Birthright? Or do you walk the more challenging path of Conquest and change your misguided kingdom from within? The choice is yours. Let the adventures begin. 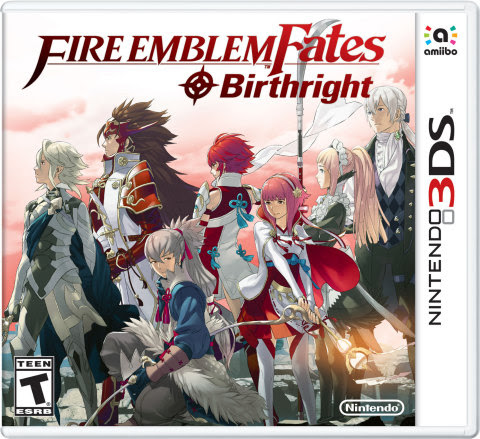 In Fire Emblem Fates, you play as a princess or prince of Hoshido who was raised by Nohrian royals, forced to make a choice that will change history (and the game itself!) forever. (Graphic: Business Wire)

Fire Emblem Fates is a tactical RPG with a massive cast of memorable characters, an epic story and a deep, yet deceptively simple, battle system. In the game, you play as a princess or prince of Hoshido who was raised by Nohrian royals, forced to make a choice that will change history (and the game itself!) forever. For the first time in the franchise, your customizable female or male avatar is the main character in the game.

Battles in the game take place on a series of grid-like maps, which serve as your setting for commanding an army of characters with different specialties. Fans of past Fire Emblemgames will be familiar with the famous “weapon triangle,” or the way different weapons are strong or weak against others. A sword will best an axe, an axe will best a spear and so on. This battle system seems simple at first, but adds an immense amount of strategy to each turn on the battlefield.

Like previous Fire Emblem games, by playing the game on the default “Classic” difficulty setting, characters that fall in battle are gone … forever. This makes every decision an important one, as favorite characters that you’ve grown to love could be gone in an instant after just one bad decision. You can also choose to play in Casual Mode to have fallen comrades return after each battle’s conclusion, or Phoenix Mode to have lost allies return immediately in the next turn of the battle.

To give yourself the best opportunity for success in battle, allies can pair up to receive stat boosts. Pairing up with another character is as easy as standing next to them on the map. In a new feature to the series, landing on special Dragon Vein spaces on the map with Hoshidan and Nohrian royals can also alter the battlefield in dramatic ways … usually to your advantage.

“ ‘Which path will I choose?’ That’s the big question fans have been asking themselves going into the launch of Fire Emblem Fates for Nintendo 3DS,” said Scott Moffitt, Nintendo of America’s Executive Vice President of Sales & Marketing. “With multiple massive adventures filled with exhilarating game play and surprise-filled stories, maybe the best answer is ‘all of them!’ ”

One of the most robust new features in all versions of Fire Emblem Fates is an area called My Castle. Here, you can prepare for upcoming battles, interact with allies to build stronger relationships or defend the castle from mysterious invasions. Many facilities of different types can be constructed in your personalized castle, including an Armory to purchase powerful new weapons, an Arena to battle for prizes and even a Private Quarters to meet with and strengthen relationships with your allies. As you progress through the game’s main story, more structures can be built, and existing structures upgraded.

Building relationships with fellow characters is one of the most fascinating parts of the Fire Emblem games. In Fire Emblem Fates, this feature continues and is more intriguing than ever before. The higher the support level, the better these allies will battle together. When two characters reach the highest relationship level, they might even get married. New to the Fire Emblem Fates games, you can use Second Seal items to give spouses the same character class.

Fans that want to play through all three versions can purchase them all separately, or pick up the Fire Emblem Fates Special Edition bundle, which launches at select retail locations on Feb. 19 and includes all three games on a single game card, an artbook and a Nintendo 3DS pouch at a suggested retail price of $79.99. By purchasing the Special Edition, fans can play the Fire Emblem Fates: Revelation game weeks before it launches as downloadable content on March 10.

Starting on Feb. 19, further downloadable content in the form of new maps will also be released on a regular basis. You can choose to buy each of these maps individually, or purchase Map Pack 1 for a suggested retail price of $17.99 to get access to all 11 maps plus bonus content as they are released at a discount when compared to buying everything individually.

Remember that Nintendo 3DS features parental controls that let adults manage the content their children can access. For more information about this and other features, visithttp://www.nintendo.com/3ds.

About Nintendo: The worldwide pioneer in the creation of interactive entertainment, Nintendo Co., Ltd., of Kyoto, Japan, manufactures and markets hardware and software for its Wii U™ and Wii™ home consoles, and Nintendo 3DS™ and Nintendo DS™ families of portable systems. Since 1983, when it launched the Nintendo Entertainment System™, Nintendo has sold more than 4.3 billion video games and more than 692 million hardware units globally, including the current-generation Wii U, Nintendo 3DS and Nintendo 3DS XL, as well as the Game Boy™, Game Boy Advance, Nintendo DS, Nintendo DSi™ and Nintendo DSi XL™, Super NES™, Nintendo 64™, Nintendo GameCube™ and Wii systems. It has also created industry icons that have become well-known, household names such as Mario™, Donkey Kong™, Metroid™, Zelda™ and Pokémon™. A wholly owned subsidiary, Nintendo of America Inc., based in Redmond, Wash., serves as headquarters for Nintendo’s operations in the Western Hemisphere. For more information about Nintendo, please visit the company’s website at http://www.nintendo.com.